In January 2015, Beau was adopted by a wonderful couple. In the image above, one of our volunteers says goodbye to her furry friend as he prepares to embarq on his new life.

I fell in love with Beau when he was at the downtown adoption center in Bradenton, where I walked the dogs on my lunch break. Walking him was like seeing the world for the first time and had always made me feel a little lighter. He was one of 32 dogs surrendered in a hoarder (breeder) case, that, incidentally, I had made the call to animal services about, requesting that they check out the situation. All of the dogs I met from that case were special, and I watched many of them be adopted and go off to their forever homes, some through Moonracer.

Beau was adopted from the shelter, and returned two weeks later. He was adopted again, broke his leash and wound up back at the shelter, where his adopter left him. He was adopted a third time, this time by a good-hearted person who just wanted to save him, as he was on the shelter’s priority list at that point, a precursor to the kill list. This third adopter’s goal was to find him a permanent home. I shared his photo like crazy, as I loved the little guy for his bright, exuberant attitude toward life. I knew he wasn’t the dog for me, though, as my home situation at the time would not have accommodated such a young, active dog. 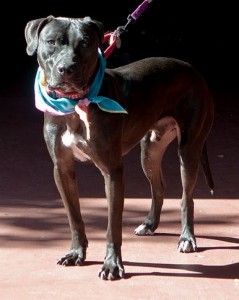 A good friend was looking for a dog at the time, saw my posts of Beau’s photo on Facebook and decided to go see him. She and her husband decided to take him, but the next 7 months were tumultuous for them. Beau wasn’t housebroken, he chewed things, he played too rough with their other dog and he dug in the yard. But during that time, he came along way, learned a lot about living in a home, and he was great with the grandkids. And my friend loved him dearly.

Unfortunately, her husband was less than enamored. He never bonded with Beau, couldn’t abide his digging in the yard, and loved the rug Beau had chosen to chew. Ultimately, Beau had to go, and quickly. A 40 year marriage trumps the relatively new dog.

I got him set up in a foster home, where he had a vacation for four months, playing with his foster sisters and enjoyed freedoms (like digging in the yard) he had been denied.

At last a family adopted him, and loved him for the next several months until deciding he was too much for their young children. He needed more exercise that they could provide, and they made the difficult decision to re-home him, though they said he was a great dog and I know they loved him.

With no other options at hand, I drove him to a boarding facility on Christmas Eve. It broke my heart to see the look of betrayal on his face. He had always expected me to take him for fun outings and greeted me enthusiastically whenever I came to pick him up. Now I was leaving him in a cage. It was horrible. And yes, I cried as I drove away.

He was there for three weeks before I was able to take him to another adoption event. Whe 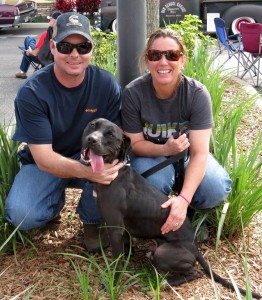 n I went to pick him up, he was very excited to see me, straining at the leash the moment he spotted me, and leaping in the car the second it was open. Though he’d been safe and well fed and walked four times a day, he was thin and dirty and it broke my heart to see him in that condition.

While at the event, our booth was visited by a couple who were determined to help Moonracer by adopting a dog in need. Beau was definitely in need. They had other dogs and land in the country. Beau liked other dogs and needed room to run. I had my fingers crossed. When they asked to take him for a walk, I cried tears of joy at the very possibility that they’d adopt him. Everyone asked what was wrong with me.

They came back from walking Beau, and I guess they saw his potential, because they asked if they could take him home that day. Since they were well known to a Moonracer volunteer, they were pre-approved, so the answer was a resounding YES! I was relieved that I would not have to take him back to boarding.

I won’t say it was smooth sailing for Beau’s new family. He had to learn that cats are not for chasing. But the other dogs seemed to readily accept him, and his new mom declared him smart from the start. I still secretly have my fingers crossed for Beau — that this will be his real forever home. There have been so many heartbreaks for him, and those who love him. 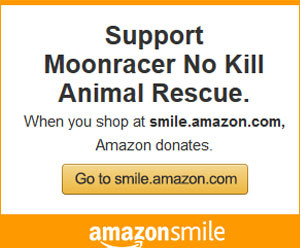